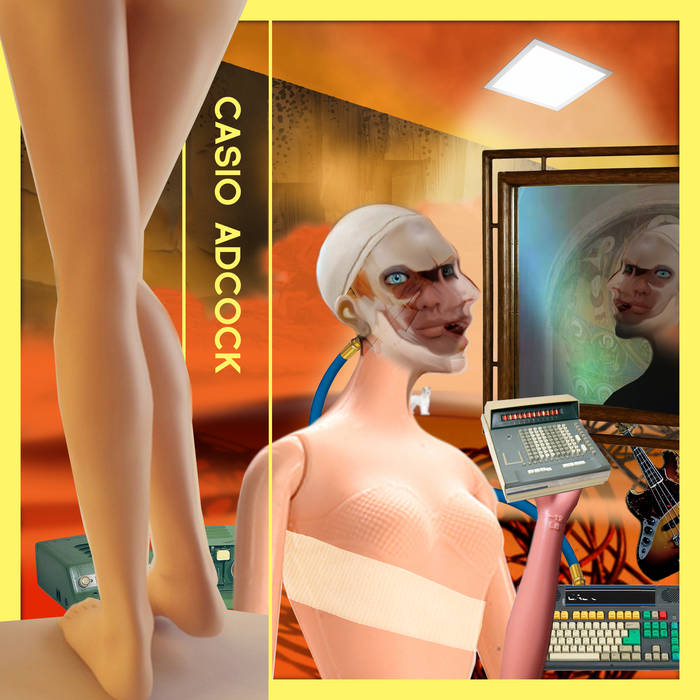 Jason Seiple This is a promising beginning to the project named Casio Adcock. Lo-fi sounds that remind me of 90's Tascam adventures, along with the pure playfulness that being able to record without anything to hold one back makes this album worth a listen.

Can't wait for the next album! Favorite track: Downward Spiral.

Indeed, for the longest time, Casio didn’t even know she existed. All she could see were half-formed anecdotes in a murky, tangerine fog – an old trampoline, a shaggy Jack Russell terrier, tangles and tangles of thick black wires. Many a curious smell wafted from every direction: French vanilla, acrylic paint, dried blood. And the noise! Dear gods, the noise! Every night, another lurch of babbling voices, drum patter, electric alarms. Shadows in synthesizers would haunt poor Casio at every waking hour, hulking shrouds with a body between them…

Then, one day, Casio saw her fingers for the first time, wrapped around a Pocket Operator. What a cute little calculator, she thought. But who measured in hieroglyphics? And what were these sounds that warbled out the back? No one could answer her, as she was alone in someone’s cubbyhole kitchen. So she tapped buttons, invented formulas, worked out sequences over the counter. When her feet began to ache, she realized she had feet, and so she walked into the bathroom. And there the full, 26-year-old body of a vaguely female human stared back in awe. Next thing she knew, she was back in the orange murk.

After a long nap of indeterminable time, Casio awoke in an aura. Someone, or something, had knocked out a tidy rectangle out of the fog above, which let in a solid beam of white light. No one needed to tell Casio what to do; in a blink, she had the Pocket Operator back in her hand, this time as her borrowed body sat in an orange swivel chair. A grimy Macbook sat open before her, so she surfed around. It didn’t take long to gather what she needed: this woman’s name was Lee Adcock, and she was planning to attend an open mic in someone’s backyard within two weeks. The concept of “email” came to her like the breath that she didn’t even realize she had.

Everyone loved Casio, even though she could barely speak. Her host body was stiff on that first “stage” (i.e. a platform above a dead garden), but her words rang with the ominous hues of the din that tortured her for so long. People sat on pillows and looked up with muted awe. The bearded young man that owned the house nodded his approval. This was Casio’s last lucid memory for four months.

By this time, the boundaries between limbo and the bright world began to blur. Notes and words filled the air wherever she walked, so that the murk seemed thinner and thinner each time it returned. New instruments would appear in Casio’s hands when she came to in the swivel chair – a bass guitar, a hand drum with “Ron Jon’s” stamped on the skin. One day, the second world had hurtled into a concrete dungeon – but below her hands, finally, Casio saw her name on a dusty keyboard. When she pressed her hands on the flimsy keys, perfect piano tones rang out. Next thing she knew, a woman in glasses was strumming by her side on a guitar, watching expectantly. Another blink, and a dozen people gazed at Casio and her partner from rows of folding chairs. Casio could speak to them now.

Casio’s time is limited, I think - I haven’t felt her mighty presence in months. It’s taken her two years to find her voice, to refine and explain her plight of how to talk to anyone at all; at times, I confuse my own state of mind with her’s, and stumble on the simplest phrases when a pretty face dares stare at mine. From what I can gather, we’re both astounded that this tape emerged at all, between her haphazard existence and my subconscious disbelief that she ever existed.

Casio may have materialized on her own, but this physical tape owes its existence to more than a few folks beyond just me. I thank Null Zone, for accepting these rough demos that Casio left on my Mac like footprints in slush (there’s never snow in Georgia). I thank Jake Crimmins, for abiding with her temperamental spirit and encouraging her to speak as haf of HAF-DAB. I thank Marie Uhler, for granting Casio a platform at her Experimentique Nights and planting the idea for the tape in our shared mind. I thank Emileigh Ireland, for coaxing Casio toward her destiny and strumming that guitar. I thank Jamie Halliday, for recognizing Casio as an actual musician before me, and inviting her to contribute to a comp. I thank everyone who helped mold Casio’s ego by talking to us after a show, and anyone who bought or listened to HAF-DAB. I thank Mike Turner, who prophesized this day many moons ago, and likely created Casio with his unrelenting support.

And finally, though the shackles don’t press so tight to my wrists, I bow my head to desire, Incommunicable and Supreme, the Miasma that shrouds both our eyes. May all the men I once coveted, and still covet now, know such a love that consumes them as completely as the mists that gagged Casio for most of my adult life.

Bandcamp Daily  your guide to the world of Bandcamp